In early 2017. We will be introduced to a brand new mechanic called "GX Pokemon!" the Pokemon are stronger versions of EX Pokemon and the first 2 we've been shown are named Solgaleo GX and Lunala GX. GX Pokemon are going to have 2 moves one being the devestating GX move which you pick up 5 cards and do what ever you want with those cards. However since these are very powerful pokemon you can only use the GX move once! meaning if you use it you can't use it again unless you different GX pokemon. 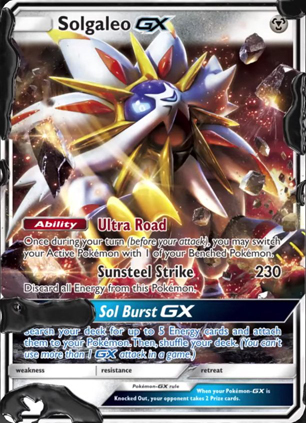 This is not the final art for the official card